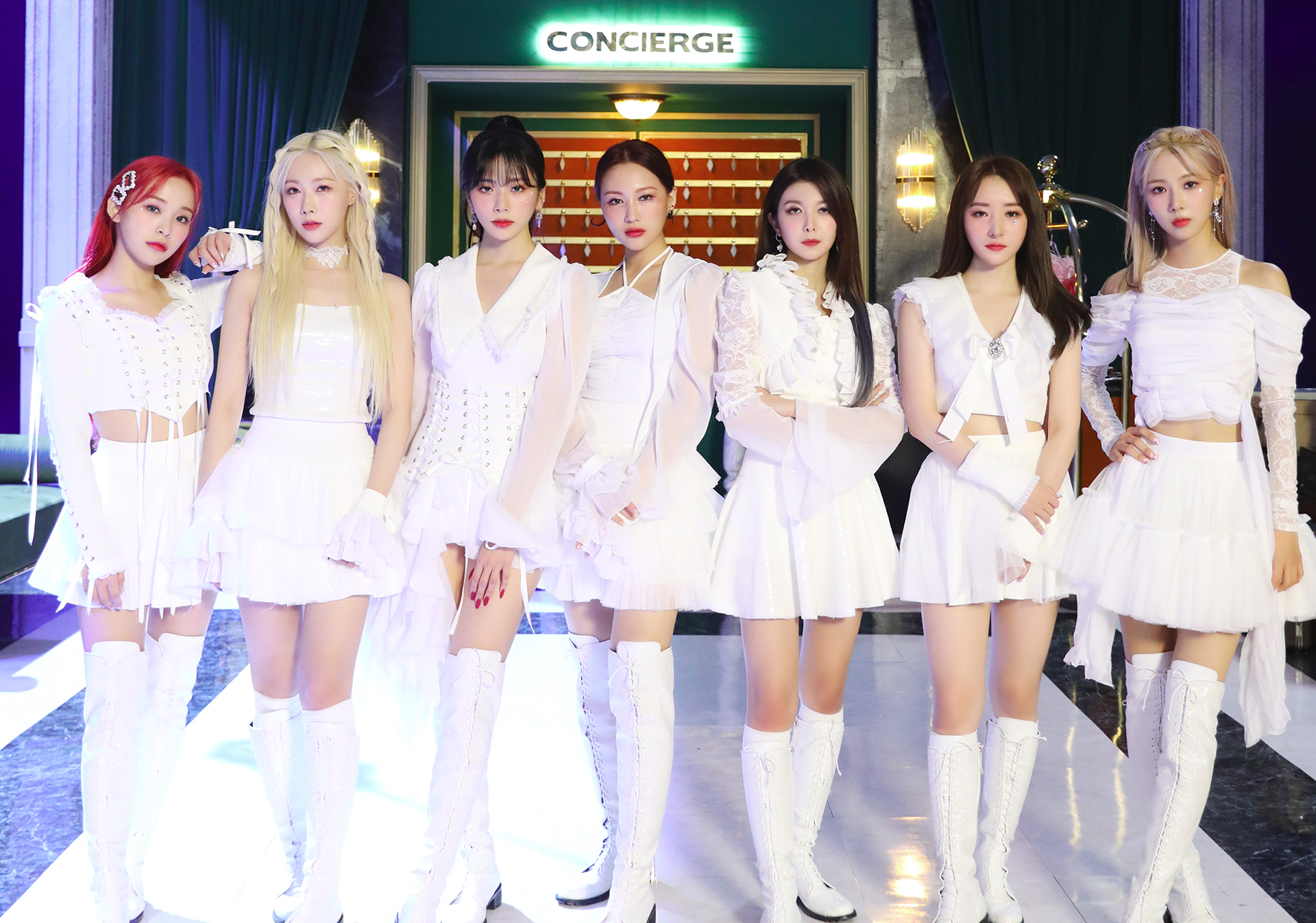 Your Scream comeback was the first time you promoted with a missing member. The delicacy you made by putting a masked dancer instead of Handong in the shows attracted the attention of most people. How did you come up with the idea of putting a dancer in representation even if it wasn’t Handong herselfhimself? How did you feel during this promotion period?

JI U: Even when DONG(HANDONG) was not with us, we still wanted to show that ‘we are always together, and we are one!!’ That is why we told our company that we wanted to do a 7-member choreography instead of removing DONG’s part 😊. Even with one member missing, we felt empty wherever we went. And when six members gather that one missing spot felt huge…I’m so happy that DONG is back!
SU A: Although the promotion period was without DONG, we wanted to make sure it felt like we were always together; I really missed being with DONG on the stage.

In your debut year, you used to put a snippet of the next comeback at the end of your songs. But the fact that You and I didn’t look alike with the clip shown at the end of Fly High and there was a 10-month gap in between made some fans think that they had a comeback change. Is this true?

Dreamcatcher: Not true! For those two music videos, it was actually because the styling and hairstyle had to change. So it’s best to see the flow of the storytelling rather than the visual elements in these two music videos!

We loved Dreamcatcher’s World, your parody of The World of The Married! If you wanted to shoot a parody of a series or movie by adding your own style, which would it be?

YOOHYEON: It would absolutely be the ‘Twilight’ series. Back in high school, I loved watching the ‘Twilight’ series and even wanted to try acting out some of the scenes from the movies. I think the theme of ‘Twilight’ would fit us perfectly!
GAHYEON: I would love to try a series or movie that can highlight our chemistry even more.

What did inspires you guys while you work on a new material / album? What can we expect of the new EP ‘Summer Holiday’?

SIYEON: More than anything, we want to show a clear difference from our last EP. What inspires me are the thoughts, ideas, and concepts we want to tell and share with our fans.
DAMI: I think I tend to fixate on keywords. When you look at keywords from a different perspective you can find different charms and inspirations.
JI U: Our new title track “BEcause” from [Summer Holiday] combines string pizzicato and voices that create an eerie atmosphere and tells the story of a doppelganger! The reason why our new EP is called ‘[Summer Holiday]’ is because we wanted to tell Dreamcatcher’s and only Dreamcatcher’s special summer story!

Your lightstick is quite unusual and interesting. In this way, it is quite different from those in the industry. How did you come up with the design and who came up with the idea to combine it with a cape? What was your reaction when you first saw it?

JI U: Our company understood our concept so well when the lightsticks were designed, so I think it came out perfect! Our lightsticks has a special function that helps you extend it indefinitely!! When I first saw the outcome, I really loved it and I thought it suited Dreamcatcher very well. As for the robes, since our debut we used to wear robes on our way to schedules, wore it during different stages, and styled it in various way. Our fans suggested that we make it as a merch! It feels as if the lightstick and the robe is one whole package through our fans’ efforts.
HANDONG: The lightstick and robe were designed by our company. The name ‘Mongmongi’ was picked from the suggestions we got from our fans. When I first saw the lightstick I was surprised when I found out that the length could be extended indefinitely. I think the lightstick and robe really goes well, and it looks even cool together as one whole outfit.

Each member has their own songs and additions to the group’s songs, but Siyeon and Handong were the first to make their solo debuts. Would you like to continue this kind of solo activities, are you thinking of releasing a mixtape?

SU A: Solo debut is every member’s dream and a future goal that we wish to achieve individually. Each of the members have their individual colors and it would be great if we could work on our own solo albums as well as working as a team. We will work towards that!
YOOHYEON: Yes! We’d all love to debut as solo artists in the future, and I would love to do an acoustic stage where I sing and play the guitar.

One of the most important thing for the musicians is choosing the „right“ songs. And as a group sometimes can be hard because every member has an own way to think while the creative process, How do you choose the right songs as a group? Do you have as a band member some disagreements or do you agree quickly?

SIYEON: We almost all agree on most things, but sometimes when we have disagreements, we try to put our personal preference aside and try to go with what fits our team’s color the best.
GAHYEON: We always discuss and share each other’s thoughts on the directions we want to take our music. We go through many different songs and genres to pick the right song.

It has been almost 7 months since Odd Eye has been released and you are entering a new era. Would there be a spoiler you would like to give us for this? Your eras have always had a bad ending so far, but will we be able to reach a happy ending in this era?

DAMI: It’s not fun spoiling the new era and whether it is a bad or happy ending. I think the charm of our team’s story is that we add our own thoughts and ideas to tell the story from each of our own perspective 😊
HANDONG: This special EP [Summer Holiday] is more about telling a story than about the new era. It expresses the obsession to win and claim love. The music video has an open-ended ending where it can be interpreted differently by each person.

The language barrier has disappeared in the thriving music industry. You are a group that is of great importance in removing this barrier for K-Pop. How does it feel to publish universal projects in your own language?

SU A: We are very thankful for our fans that love us and our music. I am very proud that the language barriers are disappearing and for also being able to contribute to removing the barriers. I think music is a universal medium that everyone can feel the same emotions through it.

If we were asked to describe the members, which words would you choose?

In What era, you preferred different clothes than your group’s fashion line. What kind of outfits would you like to try on when you go out of your usual “Dreamcatcher and combinations” line and make a comeback with different outfits?

GAHYEON: I’m guessing that a lot of people are aware that our signature style gives off a darker ambience. Our concept outfits are styled to match each of the members’ individual styles and our opinions have been applied to the overall outfit looks. There isn’t a specific look I want to try but I would like for us to try many outfits that match according to our individual style.
YOOHYEON: I would love to try outfits that are inspired by school uniforms and sing songs about high school memories. That way we will be able to take our listeners down the memory lane through our performances.

Dreamcatcher Mind, your first reality show, got the Somnias to get to know you better. So, while you were filming this program, did you discover aspects of your members that you never knew?

SIYEON: I learned that JI U is funnier than I thought and YOOHYEON is very detail oriented.
DAMI: I was surprised the most by HANDONG’s muscle strength. We always thought that HANDONG is delicate, but she is extremely strong. She managed to easily tug all of the six members.
HANDONG: And I didn’t know that I’d be considered strong…

You know there are many Dreamcatcher fan pages from different countries working for you. The Dreamerverse team in Turkey is one of them. What would you like to say to us and the teams in other countries?

JI U: InSomnias! Thank you for always supporting and loving Dreamcatcher. You all know that Dreamcatcher is here today because of InSomnias right? We were able to learn a lot, give love, and receive love together with our InSomnias! We only hope that only good things happen to our InSomnias and that you’re always full of happiness. Thank you. We love you <3

You can find out more about which cookies we are using or switch them off in settings.

This website uses cookies so that we can provide you with the best user experience possible. Cookie information is stored in your browser and performs functions such as recognising you when you return to our website and helping our team to understand which sections of the website you find most interesting and useful.

Strictly Necessary Cookie should be enabled at all times so that we can save your preferences for cookie settings.

If you disable this cookie, we will not be able to save your preferences. This means that every time you visit this website you will need to enable or disable cookies again.